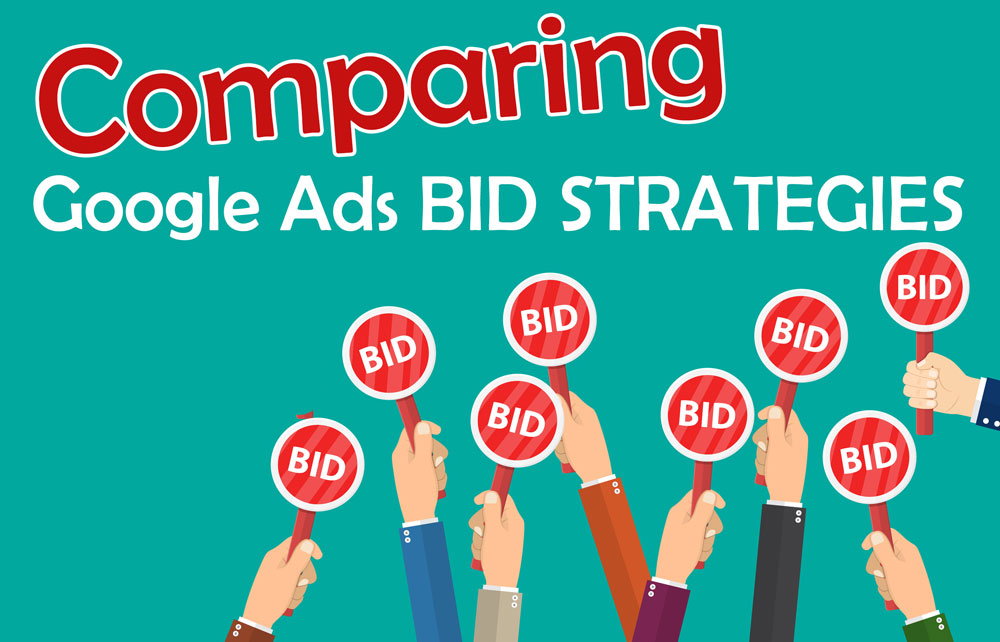 There are many levers to pull in a Google Ads account that can drastically affect the performance of your account to the point of making it a success or failure. One of these important levers, or tools, provided within your Google Ads account is bid strategies.

I’ve tested many bid strategies while managing several accounts and over $1 million spend in the last several years. My videos below provide a comparison of the top bidding strategies I use but let me describe them below in a step by step progression as I see them. 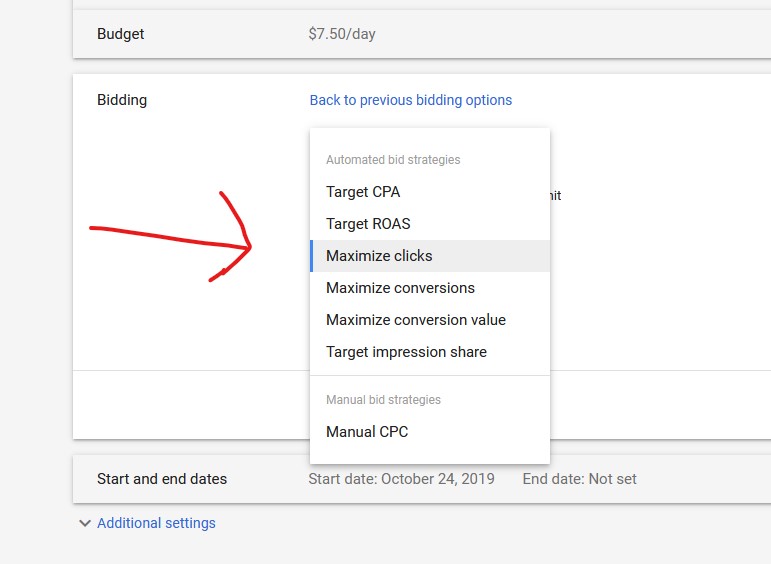 This is the typical bid strategy I use when starting campaigns.

Here’s how the Google Ads docs describe this bid strategy:

Maximize clicks is an automated bid strategy that sets your bids to help get as many clicks as possible within your budget.

One of the steps in starting a new campaign is figuring out where the competitive bids are so you can bid accordingly. You can use the Keyword Planner for this, but I like to turn on the Maximize Clicks strategy to help me figure this out.

This strategy allows me to set my daily budget and a maximum bid. Then the system will raise the bids to the most efficient level to maximize the number of clicks for the budget. This is helpful in the beginning rather than guessing where the bids are at and manually adjusting them according to volume.

This bid strategy is an “entry-level” bid strategy since it only focuses on clicks. Eventually, you want to focus on conversions and the rest of the bid strategies will all do just that.

The Google docs describe this bid strategy like this:

Maximize conversions automatically sets bids to help get the most conversions for your campaign while spending your budget.

Once you are tracking conversions, Maximize Conversions is a good option to test. Rather than focusing on maximizing clicks, this bid strategy uses smart bidding, machine learning, and data across your account and the entire Google Ads database to bid efficiently in order to maximize conversions.

One problem I have seen with the Maximize Conversions strategy has been cost control. Because this strategy has no maximum CPC option, many advertisers often see very high costs per click relative to the average CPC. This makes sense if you think about it. The algorithm may see certain clicks as having a very high chance of converting – over 75% for example. If a conversion is worth $100 in this particular account, the strategy may bid $50-75 for a single click.

Rather than evaluating CPCs over a small time frame like a single day, when using the Maximize Conversions bid strategy, you’ll want to evaluate the results over a longer time period – 30 days or more.

I’ve not used or stopped using this bid strategy in the past because the high costs per click was a major problem. However, I’ve tested it on many accounts in 2019 and found results to be much better. The bid strategy appears to be much more efficient and the problem with high CPCs, although sometimes still present on some campaigns, is not nearly as common.

There’s a good lesson here – even though a bid strategy isn’t working at one time doesn’t mean it won’t work in the future. Due to machine learning and the accumulation of data at Google’s fingertips, bid strategies are always improving. So make sure to continually test new bid strategies in the future.

The next step in bid strategies is the Target CPA (Cost Per Acquisition). This bid strategy is a lot like Maximize Conversions. In fact, it basically has all the same smart features like using advanced machine learning and auction-time strategies to optimize bids for every single auction.

The main difference between Target CPA and Maximize Conversions is that Target CPA gives you more cost control since you set the target cost per action that you’re looking to hit. So if you’d like to pay $35 for a phone call or lead, you can set the Target CPA at $35 and the bid strategy will work to get conversions at that cost.

There’s another important thing you need for this bid strategy to work – and that’s a big budget.

If you do have the budget, Target CPA is often the best bid strategy available since it has all the smart bidding features, focuses on conversions, and has built-in cost control.